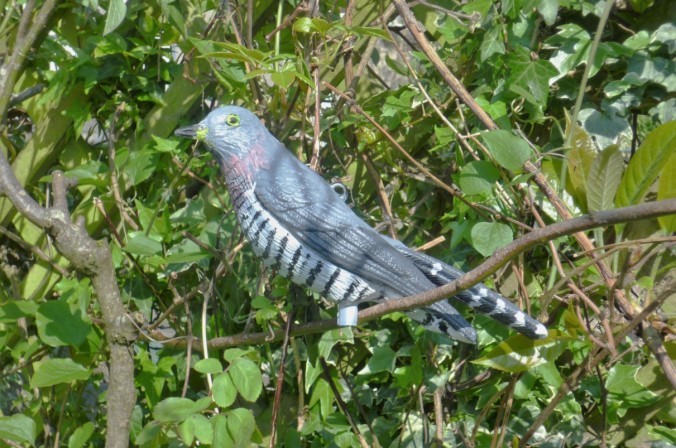 During the years with my former trainers, I used to ring regularly throughout the breeding season at several sites on Dartmoor where Cuckoos were often present. To increase our changes of trapping these difficult birds, I set about making a series of lures using plastic Magpie decoys. In the end I produced three, a male, a female and a hepatic female, which covered all the options and proved reasonably successful in attracting the birds to the netting areas, when used together with a tape.  When I changed trainers at the start of 2017, I left the decoys behind, as it has been some years since Cuckoos last parasitized Reed Warblers in Devon’s reedbeds and they would have been little use to me at South Milton.

When we returned from Crete, I received an email from a colleague, who operates a CES on Goss Moor in Cornwall, asking to borrow a decoy. Unfortunately, I couldn’t help but I’ve just had a skin cancer removed from my face and although the area affected was relatively small it’s left a big hole, which needed sixteen stitches to patch it up. Consequently, I’m not allowed to do much as the surgeon has forbidden me from ringing until the stitches come out in a week’s time. Apparently, she considers the mud, stagnant water, sewage outfall and rat and bird faeces at South Milton to be an infection risk! Anyway, to keep things brief, I used the time to make a new decoy – a standard female. Let’s hope it proves effective!

My first visit to SML for three and a half weeks and, as expected, the vegetation in the net rides had flourished in my absence. Young reeds are easily dealt with using my rechargeable hedge trimmer but the hemlock water dropwort, which has proliferated in the nutrient rich spoil used to create the paths around the perimeter of the reserve, is a tougher proposition. If left unchecked, the stems of this poisonous plant can reach a diameter of 6cm and once mature, the dry, umbrella-shaped seed heads are a nightmare to remove from a mist net on a windy day. Luckily, almost all the emerging plants were young and tender enough to be dispatched by the hedge trimmer. It will be a constant battle to keep the greenery at bay and the net rides open throughout the summer though.

I had anticipated the vegetation issues and arrived early at 05:30. The main rides were defoliated and six nets erected by 06:30. I cleared another 66m in Crake and Crest rides at the end of the session. On the bird front, things were quiet, with little sign of visible migration other than 19 Whimbrel together with a lone Bar-tailed Godwit in an adjacent stubble field. Clear skies and favourable winds the previous night had given nocturnal migrants no reason to stop. Despite this, 28 birds were trapped including 3 Blackcap, 4 Chiffchaff, 9 Reed Warbler, 8 Sedge Warbler and 1 Reed Bunting. Of the warblers, the majority were males, presumably arriving before the females to establish territories. One of the Chiffchaffs though was clearly female with a fully developed brood patch, indicating that breeding was well underway. 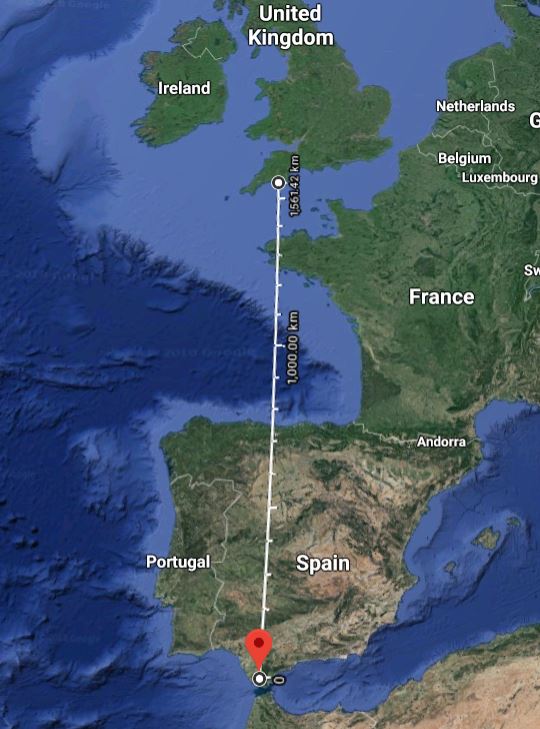 The ringing recovery referred to in my previous post relates to a 1st year, male Blackcap, ringed at South Milton Ley on 16th September 2017 and controlled at Puente de Celemín, Benalup de Sidonia, Cádiz, Spain on 22nd November 2017, a distance of 1,554km almost due south of SML.

No great surprise in the location, slap bang in the middle of the normal wintering area for British-ringed birds in the western Mediterranean but, as this is the first ever foreign control of a Blackcap in nearly 50 years of ringing at SML, I think I am entitled to a moment of smug self-satisfaction!

I’ve just returned home, after two weeks in sunnier climes, to find a BTO – Ringing Recovery Report sitting in my Inbox. The bird in question was a Blackcap, ringed at SML and controlled in southern Spain. The use of the word “Recovery” started me thinking about the nomenclature employed by British ringers and use of the terms Control, Recovery and Encounter in particular.

My personal view is that a Control is a ringed bird, which has been caught elsewhere by another ringer  and released unharmed to go on its merry way. In the darker reaches of my head I tend to think of a Recovery as relating to a bird, which has met either a natural or untimely death and ironically, the one thing it won’t be doing is recovering any time soon!

However, in BTO-speak, a Recovery is a subsequent encounter with a ring, irrespective of whether its owner was alive or dead, re-captured by a ringer, found under a window, brought in by the cat or whether the number was read through a telescope. Note the use of the word Encounter in the previous sentence. This now replaces both Control and Recovery in the latest, on-line version of the BTO’s ringing software – DemOn, where all contacts with a ring from the date of ringing onwards are referred to as Encounters. Grudgingly, I think this makes sense as it encompasses all possibilities by which a ring number could be recorded, and I cannot think of a more suitable alternative, despite scouring a thesaurus.

I’m struggling with the demise of the Control though. It still seems the most appropriate term when a ringed bird is subsequently recaptured elsewhere. There are checks involved. It is a form of control where the ring number, identity, age and sex of a bird are recorded and is not dissimilar from the process at UK airports. I suspect it will be some time before I return from holiday overseas via Passport Encounters or the nice man from Building Encounters comes around to check I have used the correct size beams in my new extension!