The first of three Siberian Chiffchaffs trapped on 26th January 2018

At last, a dry day with winds, which were low enough to get some nets up. In fact, at times in mid-morning it felt positively balmy. The sunny periods were enough to produce swarms of midges, whirling about in mating dances on the leeward sides of taller trees and a north-westerly breeze drifted them towards the net ride beside the sewage treatment plant. Things were looking good for decent numbers of Chiffchaffs. These midges are a major component of their winter diet, often turning their droppings black, when the midges are swarming. When the sun goes in the midges disappear and the warblers disperse making them harder to trap. 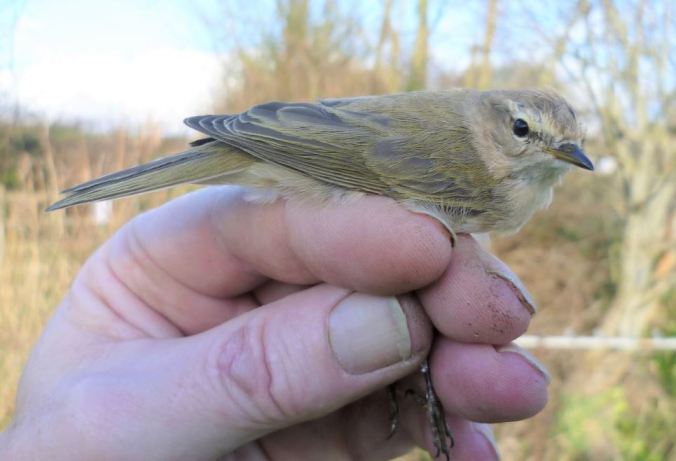 A lovely day but not many birds.  Just 14 new birds were ringed including: 5 Chiffchaff, 3 Firecrest, 2 Goldcrest and 1 Reed Bunting.

Also on site: another 20+ Chiffchaff, 1 Siberian Chiffchaff, 2 Redwing, 5 Water Rail, 1 Sparrowhawk, 1 Tawny Owl and 1 Great Spotted Woodpecker. There were 3 Hares in the middle of the field to the south of the reedbed and a weasel ran across the footpath by the sewage treatment works.

A break in the weather enabled the first of this year’s two winter reed cuts to go ahead as planned. The biting easterly wind and heavy waterlogged ground didn’t make things any easier for the thirty volunteers who turned up to help but the breeze certainly kept the bonfires going! 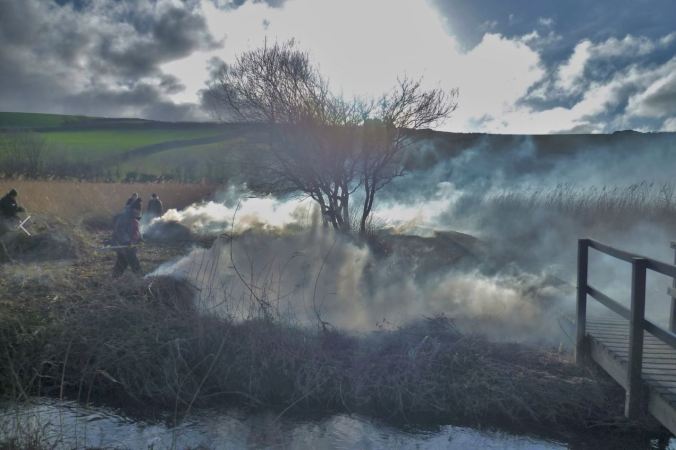 We packed up in the early afternoon, having cleared almost half a hectare. 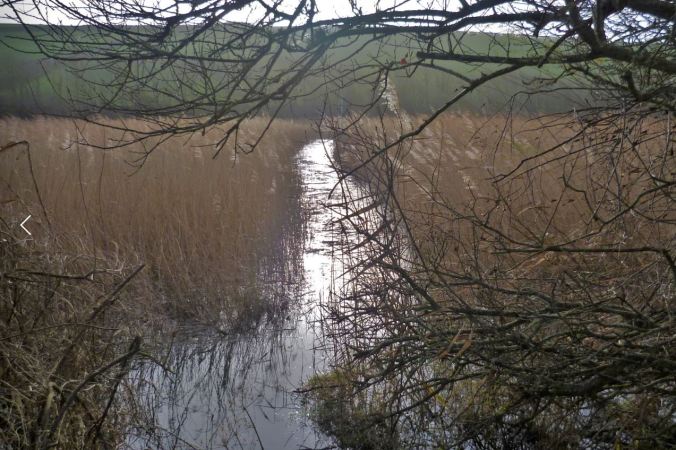 A series of deep depressions with associated high winds and rain, interspersed with brief quiet periods and heavy frosts have prevented any ringing at South Milton since the middle of December. However there have been benefits.

Storm Eleanor piled up an exceptionally high sandbar at the seaward end of the reserve and this barrier, coupled with high spring tides and a lot of water flowing from the catchment, has raised the water level in the reedbed and ditches. Nick Townsend and I visited today, to determine which areas of reedbed would be accessible for cutting next weekend, and we were able to make measurements of water depths and flows along the length of the reserve. The weight of entrained water subsequently breached the sandbar and it partially reformed over the next two days. Nick managed to make additional measurements over this period and we now have a series of observations relating the depth of water at the coastal footbridge to the extent and depth of water in the reedbed and ditches.

We have been working together with Natural England to produce a proposal to install control structures along the main drainage ditch in order to rectify the impacts of previous, over-enthusiastic ditching operations. A historical concern about a risk of flooding at Mill Lane, the eastern boundary of the reserve, has driven past management and we now have conclusive evidence that it is a lack of capacity in the culvert under Mill Lane, rather than the water level in our ditches, which has caused surface water flooding there in the past. The installation of up to three sluices would give us control over water levels in the eastern half of the reserve for the first time and should restore both the water table and gradients along and across the whole reserve with no effect on the flood risk at Mill Lane.

The widened, deepened and straightened stream in 1994